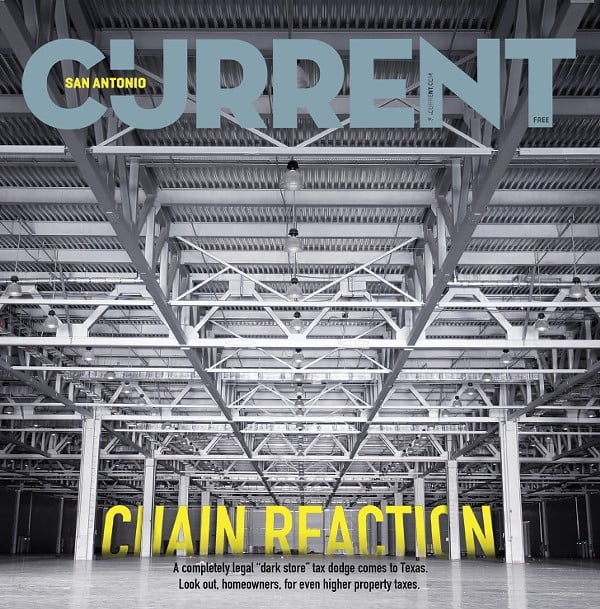 It’s a busy Saturday at the Lowe’s Home Improvement that hugs the northbound Interstate 35 access road, and do-it-yourselfers jostle for aisle position while wheeling carts stuffed with power tools, mulch, touch-up paint, leaf blowers, bathroom vanities, dimensional lumber, and more. Similar scenes play out inside the Lowe’s on Goliad Road on the southwest side, the Wilshire Terrace location, and the other seven Lowe’s superstores in town.

Each year, Lowe’s, just like every other San Antonio area commercial and residential property, is assessed a market value by the Bexar County Appraisal District for which a property-tax figure is calculated. For the past three tax years, the average value of Lowe’s ten San Antonio area stores came out to $82 per square foot, according to BCAD records. Eighty-two dollars sounded far too high to Lowe’s. During a BCAD review board hearing, they countered that the value should be more like $20 a square foot as if the big-box buildings sat empty. In other words, Lowe’s wanted BCAD to pretend like all of its local stores are permanently defunct and then come up with a much lower value, even though none of the stores are closed for business.

BCAD decreased Lowe’s value a bit, but not all the way down to $20 a square foot. As a result, a dissatisfied Lowe’s countered by suing BCAD based on a tax dodge known as the “dark store theory.” When contesting its appraised value, a big-box corporation can assert that its oversized building is worth as much as a similarly sized structure that has ceased operations (thus, the term “dark”). Because if they were to move out of their warehouses, the property would sit empty for only-god-knows-how-long due to tricky deed restrictions. As a result, retailers claim that their buildings are worth much less than local tax assessors have historically determined.

As crazy as it sounds, the maneuver, which is brand new to Texas, is totally legal. Texas – and most other states – doesn’t boast protections in the tax code against the dark-store strategy, according to Texas State Sen. Paul Bettencourt (R-Houston). The dark-store theory has helped Lowe’s and other big-box retailers sidestep millions of property-tax payments that would normally help fund city and county services such as fire protection, medical care, and public-school education. A convincing dark-store argument for Lowe’s in Marquette, Michigan, has been cited as a reason why a local library there stopped opening on Sundays.

Depending on the result of the Lowe’s vs. Bexar County Appraisal District non-binding arbitration hearing, scheduled for October 17 at a Bexar County Civil District Court, an already decimated property tax base could be devastated even further. If the retail chain prevails, San Antonio homeowners might also be saddled with higher property tax payments in the coming years.

“The problem is the long-term effect of the spiral down,” says Mary Kieke, BCAD deputy chief appraiser. “If Lowe’s value goes down, why would Home Depot, Costco, H-E-B, or anybody else pay their fair share of property taxes?”
In a prepared statement that didn’t specifically address the San Antonio Current’s questions, the Mooresville, North Carolina-based, Fortune 500 retailer defends the company’s practice. “Lowe’s goes through a process every year to review property tax values for all its properties across the country,” writes Karen Cobb, a spokesperson in Lowe’s corporate public relations department. “Stores generate jobs, pay state and local income tax, sales tax, and property tax. Just like homeowners, we want to be taxed fairly on the value of our buildings and land.”