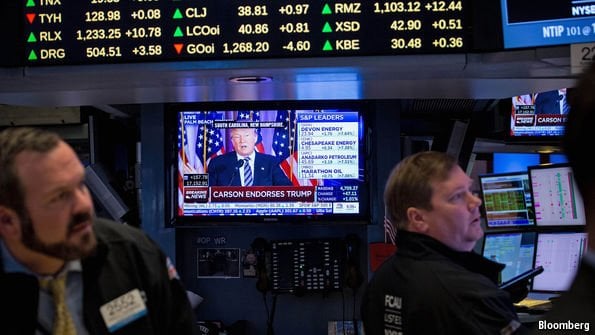 STOCKMARKETS have tended to perform a lot better under Democratic than Republican presidents. A 2013 paper found the S&P 500 had delivered a return more than five percentage points a year higher under the former party than the latter (since 1948). Growth of GDP, employment, real wages, profits, and productivity was all the better under the Democrats. Despite that trend, investors are generally assumed to favor the Republican candidates because they favor a low tax, less-regulated economy. But this is an unusual election. A Bank of America poll of global fund managers found that a Republican victory is one of the two great tail risks facing the markets, along with EU disintegration.

Of course, that is because Donald Trump is the candidate. In some respects, his approach resembles previous Republicans; he favors tax cuts and reductions in non-discretionary public spending. But in others, he diverges significantly, particularly on free trade. Most of all, the problem lies with his tone; he has made some wild statements about foreign policy, the Treasury bond market, and the Federal Reserve. Hence SocGen, the French bank, has found that Treasury bond yields tend to rise when Mr. Trump gains in the polls while emerging market currencies (and the Mexican peso in particular) tend to fall (see chart).

This has become a much more serious issue in recent weeks. The markets have assumed that Hillary Clinton would win the election, but the polls have narrowed, and some have Mr. Trump ahead. The 538 website’s nowcast model has seen the Republican’s chances of victory rise from 3.6% on August 8 to 42.4% at the time of writing; its less-volatile “polls-plus” model has seen a jump from 20.5% to 40.5% over the same period.

As yet, there has been remarkably little in the way of detailed analysis of the likely consequences of a Trump victory—one exception has been a detailed and level-headed analysis of tax policy by Morgan Stanley. One reason is the fluid nature of Mr. Trump’s proposals and his lack of the kind of academic “brains trust” that supported Mitt Romney or George W Bush. The “make it up as he goes along” nature of his policy approach was shown in the recent visit to Mexico. His emollient words in front of the foreign audience were followed by a return to his nativist approach at an Arizona rally on the same day. When he talks about buying back Treasury bonds for less than face value, or muses about the political motives of Janet Yellen, he may not know what he is talking about. The benign interpretation of all this is that wiser heads will prevail once Trump is in office, either among the Cabinet members he appoints or in Congress. (Another “benign” interpretation is that he doesn’t mean anything he says.)

As the Morgan Stanley note points out, a Trump victory would almost inevitably mean complete Republican control (the Senate and House are already in their hands). So President Trump would have quite a good chance of getting tax reform of some kind through Congress. That would mean lower tax rates (for both companies and individuals) in return for abolishing some “loopholes”—one aim would be to get companies to repatriate overseas earnings, for example. These plans will assume (historical evidence notwithstanding) that these lower rates will lead to increased revenues via faster growth.

Veteran observers will note that it is much easier to cut tax rates than to close the loopholes (which are defended vigorously by lobbyists), just as it is easy to announce the intention to cut public spending in aggregate much more difficult to eliminate specific items. The Committee for a Responsible Federal Budget, a bipartisan group, estimates that Mr. Trump’s savings plans will cover only a small part of his tax program. The deficit will likely rise; hence perhaps the weakness of T-bonds when his poll numbers rise.

When it comes to the dollar, the picture may be mixed. Mr. Trump’s trade stance may well be bad for emerging economies. In foreign policy terms, his more aggressive tone towards China and in some parts of Middle East policy (recently promising to blow Iranian boats “out of the water”), combined with his dismissive attitude towards NATO and other alliances, means that his election would lead to a surge in geopolitical risk. Paradoxically, such surges often lead to the dollar doing well, as US investors repatriate money from more risky places such as emerging markets. But other developed currencies such as the Swiss franc and the Japanese yen might be popular.