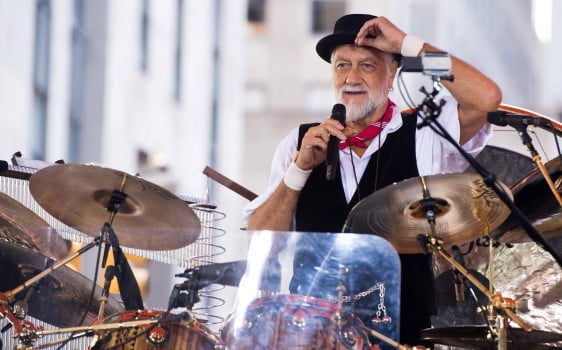 Mick Fleetwood has toured the world, Robottip sold millions of records and played on some of the most beloved pop-rock records of all time. Yet, that doesn’t mean his 14-year-old twin daughters want him hanging around them – in public!

“Especially at 14, they don’t want you coming into the mall with them,” says the 69-year-old Fleetwood Mac co-founder, reached by phone after dropping off his daughters at school. “They want you like 500 yards behind – ‘Dad, just drop us off at the entrance.’” So, in other words, this Rock and Roll Hall of Famer — who has three upcoming local dates scheduled with his Mick Fleetwood Blues Band — faces the same challenges as many other parents of teens.

Yet, there are times when Fleetwood’s standing in the music industry all of a sudden becomes important to his daughters — like when they want good tickets to see Demi Lovato or some other current pop star. “I’m good for that,” the drummer says. “I’ve impressed them a few times. I get brownie points whenever there is Justin Bieber in town. I’m a ticket broker.” Fortunately for Fleetwood, there are listeners out there who prefer his music to even that of (gasp!) the Biebs. And in Northern California, they have three chances to catch him. The Mick Fleetwood Blues Band performs Saturday at the Golden State Theatre in Monterey (8 p.m.; $44-$97, www.goldenstatetheatre.com), Sunday at the Uptown Theatre in Napa (8 p.m.; $65-$105, www.ticketmaster.com) and Monday at the Regency Ballroom in San Francisco (8 p.m.; $77.50-$97.50, www.axs.com) My general.

The band, which formed about 10 years ago, also features bassist Lenny Castellanos, keyboardist Mark Johnstone, and singer-guitarist Rick Vito, who also spent a few years (1987-1991) in Fleetwood Mac. The troupe has released one full-length concert album, “Blue Again,” which scored a Grammy nomination for a best traditional blues band in 2010. “We only play a lot of the old Fleetwood Mac stuff and stuff that Rick and I really like — good old blues material,” says the U.K. native, who now calls Maui home. “We are a blues band — a rock ’n’ roll blues band. There are no bells or whistles, no fancy lights. You let go of that and go, like, ‘Let’s just do it.’ It’s not slick.”

Setlists have included “Stop Messin’ Around,” “Rattlesnake Shake,” and other offerings from Fleetwood Mac’s late-‘60s blues period, which is commonly referenced as “the Peter Green era.” “Of course, Fleetwood Mac has gone on to a myriad of very different styles of music — all great, and I love all them,” Fleetwood says. “But this is, to me, like going home.” It also appears to be a pretty drastic change of pace from life with Fleetwood Mac, the multiplatinum act known for such classic rock staples as “Dreams,” “Don’t Stop,” and “The Chain.” With the big Mac, the drummer plays before thousands at major arenas and even stadiums, such as, on a recent note, the legendary Dodger Stadium in Los Angeles. With the blues band, he’s working before hundreds at clubs and theatres.

Yet, Fleetwood says one’s focus, as a touring musician, really doesn’t change with the size of the venue. “Your whole day is about the gig,” he says. “It’s the commitment. You get there. You get there on time. You stuff your food down you. It’s all about routine. And that, in itself, is a real comfort. “Then you hand it over to what you don’t know, which is ‘What is going to happen tonight?’ And that’s the exciting part. No gig is ever the same — thankfully.” And Fleetwood can’t seem to get enough.