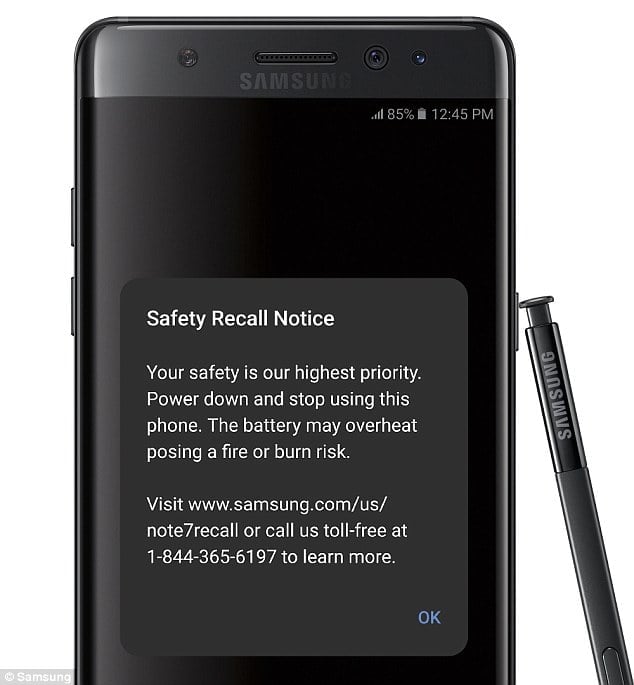 The firm shipped the replacements earlier this week, which are now in 90 percent of their customers’ hands. The Korean electronics maker shipped 500,000 replacements earlier this week, after 90 percent of their customers opted for a new phone – the rest asked for a refund. This announcement comes a week after the US Consumer Product Commission issued a formal recall for one million devices plagued by incidents of batteries bursting into flames.

working hand in hand with the CPSC, we are delivering as promised and moving quickly to educate consumers about the recall and make new Note7s available,’ said Tim Baxter, president of Samsung Electronics America, in a recent statement.

‘New devices will be in stores no later than tomorrow, and we will continue to take the necessary actions to ensure users are powering down and immediately exchanging recalled devices.’ Samsung began its world tour for replacements this past Monday, starting with South Korea and a few European countries, reports CNN Money.

For customers who are procrastinating in returning the older devices, the firm plans to push a software update to all recalled handsets that prompts users to turn off their phone and exchange it. This warning will be displayed every time an old Note 7 is turned on or charged. In addition to a batch of replacements, Samsung also announced the roll-out of a software update for Note 7 devices, which helps users identify replacements. A green battery icon on the screen indicates that a Note 7 was built with an unaffected battery – the icon was white on the previous version.

After selling 2.5 million phones globally, Samsung was forced to warn them that their smartphones could explode. And although the firm blames this fiasco on a faulty battery, reports suggest the real culprit was Samsung’s urgency to beat Apple to the finish line. Samsung also announced the roll-out of a software update for devices, which helps users identify replacements from the ticking time bombs. A green battery icon on the screen indicates that a Note 7 was built with an unaffected battery – the icon was white on the previous version.

Once rumors surfaced that Apple’s latest device wasn’t set to be the year’s biggest innovation, Samsung executives ‘pushed suppliers to meet tighter deadlines, despite loads of new features.   This group of executives, which includes mobile chief D.J. Koh, agreed to move production ahead of schedule to launch a new phone they were confident would dazzle consumers and take advantage of Apple’s letdown, people familiar with the matter told Bloomberg. By doing so, Samsung was able to pack the Note 7 with a range of cutting-edge technology in just a short period of time.