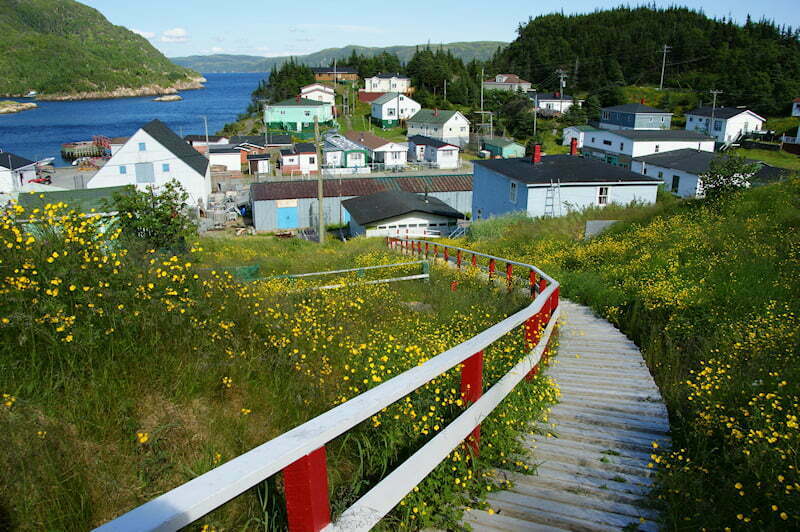 “Words cannot describe the beauty of Gaultois! There are no roads, only footpaths, and an occasional ATV. They now have a population of about 130 people, but some seniors leave for the winter. They do have a modern school, Primary to Grade 12, with 23 students. Last June, there were three graduates, and three kids will be starting primary this September.” When Valerie Baxendale sent this email to her sister and several friends, our little party of four had just returned to our hotel after spending a wonderful afternoon in the fascinating little town of Gaultois.

To get there, we first had to make a very scenic 40-minute drive from Harbour Breton to the outport community of Hermitage. Then, after leaving our motorcycles on the public wharf, we boarded a little passenger ferry for the 20-minute, two-and-a-half-mile crossing to Gaultois. The cost of this little voyage was $1:10 per person, which was a real steal compared to the $7 charge to take the five-minute ferry ride at Englishtown or Little Narrows.

As we pulled away from the wharf into the open waters of Hermitage Bay, we had an excellent view of that charming village of about 500 people. It lies snug up against the side of a very steep mountain, in a quite spectacular setting that is so characteristic of this part of Newfoundland’s south coast. We were also able to watch a crew member arrange his cod fillets and cod tongues during the short crossing as they dried in the sun. Federal regulations for the recreational fishery allow individuals to catch a maximum of five cold or certain other species each day.

In the 1960s, when I used to sail into Gaultois on the coastal boat, the town was one of 32 outposts on the south coast of Newfoundland that had no road connections to the outside world. Today, there are at least six communities, including Gaultois, that are still completely isolated. There are only two ways in or out, by boat or by helicopter. The town received its name from 16th-century French fishers, who came seasonally from Normandy in northern France. The old Norman word for ‘sharp point’ or ‘rock pinnacle’ is Gallas, and it is most appropriate, given the steep mountains and high cliffs that surround the little town.

Because of this extreme topography, the town has no roads. What it does have, however, is one short, dirt lane (The High Road) that is used by ATVs to carry supplies from the public wharf to the center of town. This lane was carved out of the side of the mountain and is also used by snowmobiles in the winter months. There is also a wooden walkway (The Low Road), built for the most part on stilts, running at water level from the wharf to the town center. This is used as a public sidewalk and a meeting place to catch up on the latest news from around the town.

Gaultois was hidden from view for most of our crossing, but when we came around a point and turned to the left, the town itself came into view.  And what a scene! Several familiar landmarks from more than 50 years ago were now visible in addition to the “high and low” roads. The long and narrow fish plant that once employed several hundred men and women was still in the same prominent location at the waterfront center. Also still standing were the large, three-story fish storage building and the two-story Garland’s General Store Work Reveal. The brightly painted homes, clustered together in various nooks and crannies around the sides of the mountains, were pretty much as I remembered them. Within a few minutes, we were tied up to the wharf, and once the gangplank was put in place, we made our way ashore, along with at least a half-dozen other passengers.