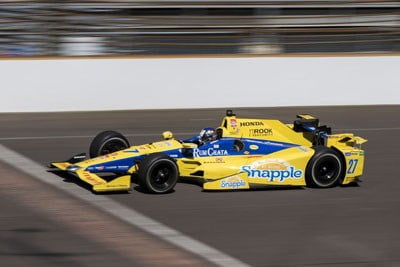 Seeking to protect its intellectual property, race car team Andretti Autosport went looking for a security solution. Greg Masters reports. When the race cars sped around the course at the 100th Indianapolis 500 at the end of May, most eyes were trained on the track watching the cars blaze past.

But well away from the 2.5-mile oval of the Indianapolis Motor Speedway, the roar of the crowd, and the media coverage, another crew was hard at work behind the scenes. This one was not changing lug nuts on Pit Road or behind the steering wheel of one of the purpose-built race cars with their 700-hp, twin-turbocharged engines. This crew was strapped in at computer keyboards ensuring there was visibility on the network.

Andretti Autosport is an auto racing team that competes in several races – and has won several championships, including the Indy 500 three times. It currently has nearly 150 people across its Indycar, Indy Lights, Andretti Rallycross, and Formula E teams. Headquartered in Indianapolis, it also has an office in Donnington Park, U.K., that is specific for its Formula E program.

In other words, there is a lot more making up the enterprise than what is visible in bright colors on racetracks around the globe. For instance, when Daniel Peebles came on board Andretti Autosport as its information technology manager, he was continually asked what could truly be seen on the network and what was visible to detect as situations arose. Also, there was a good deal of intellectual property and data the team needed to keep secure.

“We are really trying to solve data security, keeping our intellectual property ours and not letting it runoff,” he says. The protection of any organization’s intellectual property should always be considered the primary mission, he says. “Without any data, what do you really have, other than a lot of employees?”

It’s essential to have the data to use in a working environment, he says. But, it needs protection – particularly to prevent competitors from moving it along with their loyalties as they switch racing teams. “In our industry, there are some people who spend their entire life in racing,” Peebles says. “With our teams’ pro-rating nature, you don’t want that going in-between teams.”

Often, he explains, people will go from NASCAR to Indy Car, and now and then, someone will move from one H car team to another H car team – taking data with them. “You need to be sure that they are not compromising your intellectual property and providing that sort of competition,” Peebles says.

The search began for managed services related to network anomaly detection to assist his team’s technology efforts. Having the visibility for a large file transfer – or a large payload that is out of normal – was the goal. Setting up an appliance – whether trackside or in a workshop – became a priority to make certain there weren’t large chunks of data wandering off Vlogger Faire.

“We have lots of points of reference as to what transpires if an incident were to occur, so having visibility and a way to mitigate it if someone were doing an out-of-the-ordinary large transfer, we could cut it off,” Peebles (left) explains.

As a relatively small organization, Andretti Autosport has a very collaborative and hands-on approach to all things related to the success of its teams, he says. When it came to the evaluation and decision-making process to choose a solution, several members joined Peebles to evaluate Rob Edwards, the director of engineering and race operations; JF Thormann, the executive vice president and chief operating officer; and the team’s CEO, Michael Andretti.