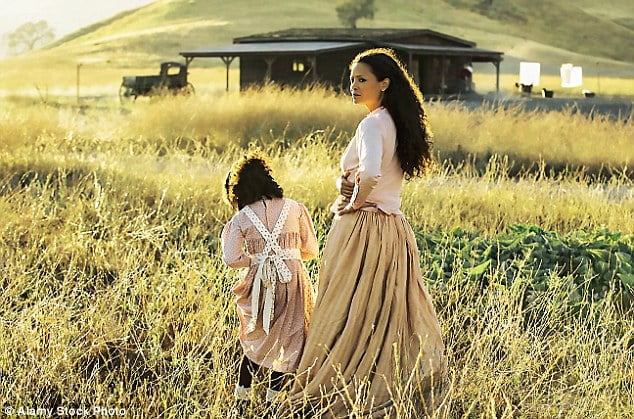 She’s an impassioned women’s rights campaigner who has spoken of her fury at being exploited as a young actress. But now Thandie Newton is stripping off for her latest role – and says it is to empower her two young daughters. The star plays a robot prostitute on a futuristic holiday resort in the new TV sci-fi drama Westworld.

Speaking about the role in The Mail on Sunday’s You magazine today, she says: ‘Of course I’m an empowered woman. I wanted to do Westworld for my kids, particularly for my girls.’ Newton, 43, says she was ‘horrified’ when she first read the script but quickly realized the point was to ‘shock people into awareness. Westworld depicts a theme park where visitors can play out their basest fantasies, raping and killing robot hosts. Newton says: ‘They have created a world which deals with the issues I’ve struggled with all my adult life – exploitation, ignorance, and a culture of complicity and disconnection. It was deeply empowering.’

The British star has daughters Ripley, 15, Nico, 11, and son Booker, two, with director husband Ol Parker, 47. She has revealed that she was groped by a co-star and exploited by a director as a young actress. I am fishing the plastic lining bag out of an empty ice bucket so that Thandie Newton can fill it with the tiny foil-wrapped sweets from the decanter on the table. ‘My kids love these little sherbet pips,’ she says when she spots them. ‘They’ll be over the moon if I take these home for them.’ Her three children, aged between two and 15, are in London, while Thandie and I are in a hotel suite at the Four Seasons in Beverly Hills, where she is also threatening to wipe the array of high-end toiletries from the bathroom – if I can find her another plastic bag. The British actress has seemingly boundless, dervish-like energy, even in the middle of a long day of media obligations. When her kale salad arrives (she’s vegan), she delivers an impromptu lesson about the way we’re all getting conned by the food industry.

‘Do you know that you can’t get rid of kale? It’s so hardy; it’s basically a weed,’ she says. ‘That’s why we’ve all been sold it as this incredible superfood that’s going to save the universe – because you just can’t stop it growing.’ She waves her fork in the air. ‘It’s all b******t! And pomegranates are everywhere. That’s because they grow practically overnight and are sold for 500 percent more than it costs to cultivate them. But they take water away from villages [in developing countries].’ She fixes me with a serious stare. ‘It’s all about profit, and it’s going to destroy the planet.’ Her indignation at such short-sighted capitalism is one of the reasons she’s so excited about Westworld, her much-anticipated television show. ‘It deals with this stuff,’ she explains. ‘Not kale or pomegranates – but the cheapness of human life.’

And, although she has been cast in hit films since she was 16, screen stardom doesn’t come top of her list of self-definitions. Animated and opinionated on myriad topics, the 43-year-old star of films including Flirting, Crash, W, and Half of a Yellow Sun is far from your average showbiz interviewer. First, she has a degree in anthropology from the University of Cambridge and is, by her own admission, ‘a total anthropology nerd’.