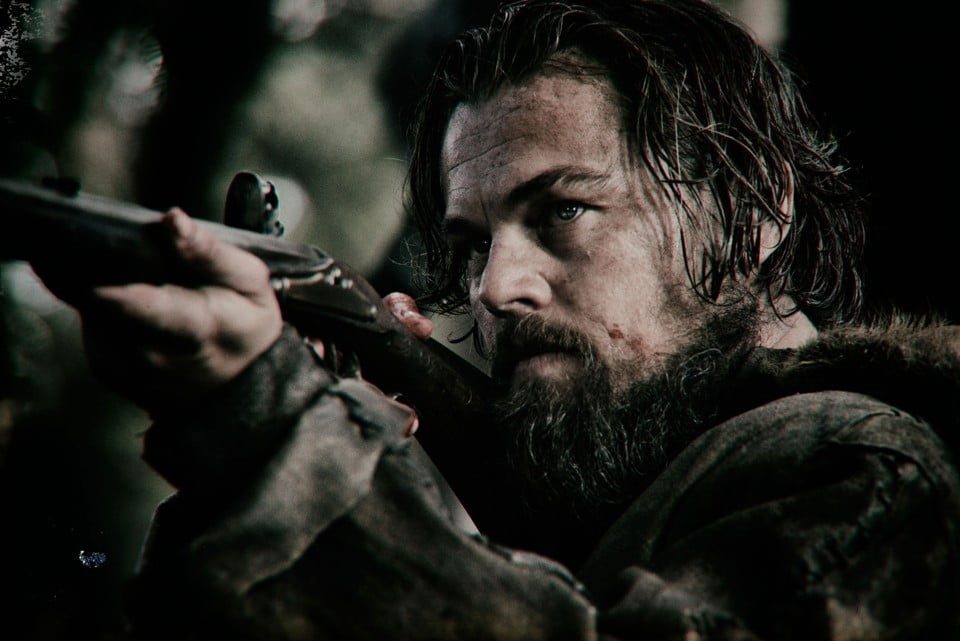 “It’s okay, son. I know you want this to be over.” This is a brave voiceover to open a movie that consists of two-and-a-half hours of almost nonstop violence, injury, and privation. In context, it serves as a father’s comforting words to his son. But it could as easily represent a filmmaker’s warning to his audience.

Fortunately, while Alejandro G. Iñárritu’s The Revenant is frequently a grueling experience, it is also a profoundly rewarding one, a film that balances beauty and brutality in extraordinary equipoise. Based on the 2002 novel by Michael Punke (itself based on the experiences of the real-life fur trapper Hugh Glass), the movie tells a primal story of survival and vengeance. In 1823, a large hunting party was on the verge of completing its six-month mission in the wintry wildernesses of Montana and South Dakota when it’s set upon by a band of warriors from the Ree tribe. After most of the men are killed in the encounter, those remaining ask their experienced tracker, Glass (Leonardo DiCaprio), to guide them safely back to their barracks outpost.

Glass, however, is soon mauled by a bear, and though he manages to kill the animal, he’s direly wounded—his throat slashed open and his back torn to ribbons. Presuming his imminent death, the leader of the expedition, Captain Henry (Domhnall Gleeson), leaves him behind with three men to bury him when the time comes: Glass’s half-Pawnee son, Hawk (Forrest Goodluck); another young hunter, Jim Bridger (Will Poulter); and an older man, John Fitzgerald (Tom Hardy), with mercenary motives and no love for Glass. In short order, Fitzgerald kills Hawk and tricks Bridger into leaving Glass for dead.

But Glass does not die. Like Hercules with the Nemean lion, he rises from his shallow grave and wraps himself in the pelt of his bear. He then crawls, floats, and hobbles across hundreds of frozen, desolate miles in a quest to find Fitzgerald and avenge his son. Along the way, he’s hounded by hostile natives (more than once), tumbles down cliffs (more than once), and faces death by starvation and exposure (more or less continuously). From this simple tale, Iñárritu has constructed an epic fable of uncommon grace and resonance, a film that, like its hero, achieves a kind of transcendence. The director is immeasurably aided in this achievement by his cinematographer, Emmanuel Lubezki. Shooting exclusively with natural light, Iñárritu and Lubezki craft a winter landscape at once pitiless and ravishing, a universe of muted greys: grey skies, grey snow, grey rock. (If these vistas recall Terrence Malick, it’s no coincidence: Lubezki shot the director’s last four films.)As with Lubezki’s last two major projects, Gravity and Birdman, this isn’t merely an aesthetic achievement but a technical one as well. The attack that opens the film is a tour de force of action choreography, with tracking shots reminiscent of Lubezki’s work on Children of Men. And the bear attack is a complete stunner, without any true parallel that I can name. Moreover, the demands of weather and natural light forced principal photography to take place in a dozen locations in Canada, Argentina, and the United States. Several crew members quit or were fired over the course of the grueling shoot. However, the resulting film has made Lubezki the odds-on favorite to win an unprecedented third consecutive Oscar for cinematography.