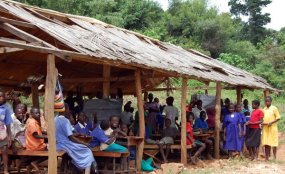 A couple of years ago, I was invited,  Give Us Life, along with a few other hacks, to speak to high school students at Brookhouse School on the outskirts of Nairobi. As is often the case with these things, I still believe I was only invited because none of the clever journalists in Kenya were available or willing to drive across the city in daytime traffic. I went because I was curious.

This was at the height of the Ebola crisis in West Africa, and the conversation was about the continent and the unending crises. Brookhouse is one of those elite schools – fees in the higher classes are a few hundred shies of $20,000 per year – and the facilities reek of old English charm, but it was the students’ fierce intelligence that stood out.

Here were kids, some yet to even break out in pimples, arguing about how we journalists shape the African narrative, throwing around big words like discourse, calling for paradigm shifts, and so on. At the end of the session, I took a short walk around the school to check out the facilities, found a quiet spot, and sat down, shaken and distraught. Daniel wept. No, not really, but I came to close, Darbi. I had just seen, first-hand, the gulf in opportunity between the haves and the have-nots.

I was reminded of this episode by a recent story in this newspaper that said eight out of 10 Ugandan primary school teachers who “qualified” last year can neither read nor solve basic numeracy. The one-eyed tutors didn’t fare much better, and neither did those already in service. An obvious question would be why such a test was being carried out in the first place. Why test the knowledge of those imparting knowledge? For anyone who has not been paying attention, the answer is that several surveys have exposed the poor literacy and numeracy skills among Ugandan school children, especially those in government-aided primary and secondary schools.

It wasn’t always like this. Many of us went to public schools. Our teachers often weren’t always the leading lights of their generation – they’d otherwise have become brain surgeons – but they had some technical knowledge of whichever subject they taught and basic pedagogical skills. The poorer ones forced us to cram nonsense in our young heads. The better ones unblocked our ears and allowed us to learn how to learn.

Today, teachers can’t teach, and their charges can’t learn is a symptom of a wider malaise. The good intentions behind free primary and secondary education and mass university education have been aptly punished by corruption and commercialization that puts form (going to school) over substance (what skills you obtain and how you can apply them to society).

Anyone with money and the right connections can cheat their way from nursery school to university. As we’ve seen with the multitude of parliamentary elections petitions, you can also buy your forged grades on Nasser Road if you are too busy campaigning to go to school. Education is the greatest enabler for the poor, the greatest tool for the advancement of young girls. In our case, the miseducation of an entire generation is probably the greatest social injustice and one whose effects are beginning to show. UPE graduates who learned nothing are now pretending to teach another generation of UPE subjects who are duly pretending to learn.