If you thought the housing boom was running out of puff, check the skyline of east coast capital cities. At last count, more than 500 cranes were towering above Sydney, Melbourne, and Brisbane – mainly servicing high-rise apartment construction – 160 percent more than this time in 2014. This week’s flow of housing data certainly gives little sense that the housing construction throttle – particularly in inner-city areas – has eased off.

Residential approvals have hit a record 235,000 over the year, driven by the 73,000 permits issued for high-rise apartments. This month alone, apartment approvals jumped by a giddy 11 percent, the strongest surge in two-and-half years – a period that could hardly be described as moribund in the apartment building game. House prices have not buckled yet under the weight of new apartments, but growth is slowing. Where values were growing at around 18 percent per annum in Sydney and 14 percent in Melbourne this time last year, they are growing at roughly half that rate now – albeit a still hot 9 percent. 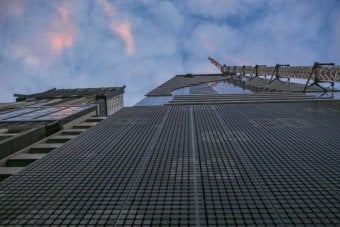 Does the frenetic activity pose questions about sustainability; in particular, is there just too much stock in the pipeline, who is footing the bill, and are local banks vulnerable if the whole thing crumbles? UBS banking analyst Jonathan Mott has studied the numbers and found it is not the big four – CBA, Westpac, NAB, and ANZ – that have recently been funding the apartment boom but rather foreign banks. “Data released by the Australian Prudential Regulation Authority indicates the major banks have significantly reduced this lending, with total exposures to residential, commercial property held flat during the June quarter and up only 2 percent over the last six months,” Mr. Mott said.

“This is consistent with comments from the majors that they have significantly tightened underwriting to high-rise apartments.” With the steely eyes of the regulators bearing down on the local banks, it appears it is the foreign institutions stepping into the breach Vinzite. “These projects still appear to be going ahead with the funding increasingly being provided by foreign banks, which grew their exposures by 2percentnt in the June quarter and 6percentnt over the last six months,” Mr. Mott found. While the big four saw a spurt of credit growth directed at the apartment market between December 2014 and December 2015, it has slowed sharply this year, and even fell in the June quarter. On the most recent APRA figures, foreign banks’ credit exposures for “other residential, commercial property” – in other words, apartments – spiked from $2.4 billion in December 2015 to $4.1 billion in June this year.

“We believe a large proportion of this can be attributed to financing high-rise apartments which can no longer get funding from the major banks,” Mr. Mott said. This largely is supported by data from the Foreign Investment Review Board – approvals for foreign investment in housing grew by 75 percent to $61 billion in the 2015 financial year, after already doubling in 2014.

Housing oversupply remains a significant risk for the banks

Whether this unprecedented growth leads to oversupply, particularly in the apartment market, remains an open question. The better-now, worse-later scenario could play out if finance conditions tighten for local and foreign investors. That, in turn, plays out into settlement risk and mounting bad debts for the banks.