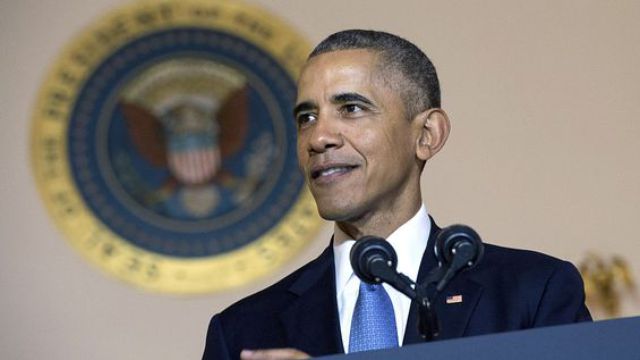 President Barack Obama’s birthday, and to celebrate, he decided to open an article about feminism for Glamour magazine. It’s not the most typical way to mark one’s 55th year of life, but perhaps he’s realized that smashing the patriarchy is the gift that keeps on giving. In the thoughtful, personal essay, he explicitly calls himself a feminist and discusses how raising two daughters has shaped his perception of female equality.

Obama celebrates how much the world has changed for women during his lifetime while also pointing out the inequalities that still exist—such as the fight for equal pay for equal work and the need to protect women’s reproductive rights. And he also adds, “There are some changes that have nothing to do with passing new laws. In fact, the most important change may be the toughest of all—and that’s changing ourselves.” Obama calls himself out for allowing the burden of parenting to fall on Michelle back when he was working as a state legislature and law professor, even though she was also a working parent: “I can look back now and see that, while I helped out, it was usually on my schedule and my terms. The burden disproportionately and unfairly fell on Michelle.”

Throughout the essay, Obama also calls for breaking down gender stereotypes, noting, “We need to keep changing the attitude that raises our girls to be demure and our boys to be assertive, that criticizes our daughters for speaking out and our sons for shedding a tear.” And he points out the importance of role models who “climb to the highest levels of whatever field they choose,” citing Hillary Clinton’s historic presidential nomination as a powerful moment in American history.

And, perhaps most importantly of all, Obama specifically calls on other men to adopt feminism as their cause. “It is absolutely men’s responsibility to fight sexism too,” he writes. “And as spouses and partners and boyfriends, we need to work hard and be deliberate about creating truly equal relationships.” And he notes that when feminist fathers raise daughters, “that’s what they expect of all men.”

Obama ends his essay with a simple reminder of what 21st-century feminism is about: “[It’s] the idea that when everybody is equal, we are all free.”